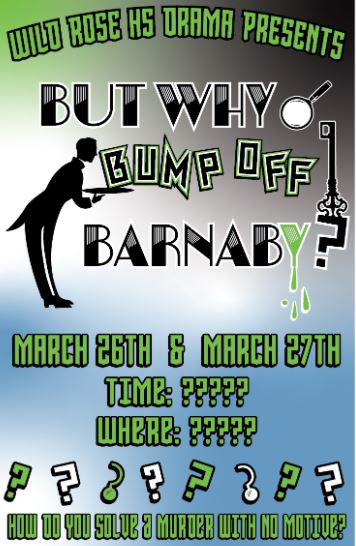 SPRING PLAY - BUT WHY BUMP OFF BARNABY?

But why Bump off Barnaby? This lunatic show poses a fascinating mystery. When Barnaby Folcey is murdered at a family gathering at Marlgate Manor, it transpires that he had a motive to murder everybody else, but no one had a reason to want him dead. While dying, he scrawled the letters "b-a-r," which can implicate everyone. While the bizarre group frantically tries to unmask the murderer, people vanish, poison is found in the sherry, and the police take forever to arrive. Meanwhile, there's a secret treasure to be found, a mystifying limerick to decode, and all sorts of doom to be avoided before the killer is finally unmasked and destroyed using one of the funniest methods ever seen on a stage.