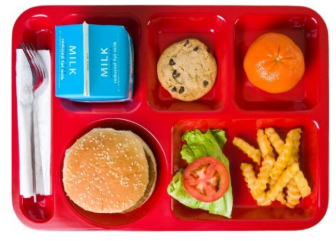 WAUTOMA, WI (WTAQ-WLUK) - It's a Christmas miracle for students struggling to pay for school lunch in Waushara County.

A Wild Rose man organized a fundraiser that brought in thousands to erase their debts, after hearing that some kids are often singled out or bullied for not being able to pay for their lunches.

"Not necessarily in Waushara County, but at other schools in Wisconsin, certainly,” organizer of the Waushara County School Lunch Program Debt fundraiser Craig Carpenter said.

“That hit me, and I thought, 'Man that would be really cool.'"

Carpenter tells FOX 11 he and several friends have donated to the Wild Rose school lunch debt program during the holidays for before.

“There were letters with some of the donations, saying 'Hey, thank you for doing this. We were, you know, I was one of those kids when I was growing up, and now I'm in the position to help, when it was me that was being made fun of, or struggling.”

This year, he wanted to help reach more students in need.

He decided to spread the joy to other schools in Waushara County, including Wautoma.

"Sometimes, you know, we don't get payment, for whatever reason, so this will be very beneficial for those families,” Wautoma School District food service director Tami Stansbury explained.

“Sometimes families are struggling, and at no time should the student be shamed or penalized, because that debt hasn't been paid, because they can't generate the money to pay that.”

It raised more than $5,300 in about two weeks, to help erase all student debt at Tri-County, Wild Rose, Wautoma and Coloma schools for the whole year.

“That debt that you were carrying here; that's been hanging over your head, or your kid’s head, it's gone, and that should be pretty cool for Christmas.”

Rheinheimer says the generosity of all those who donated is much needed and appreciated.

“I'm sure the families will be happy, obviously, the kids are going to be happy.”

Carpenter didn’t want any credit whatsoever and, in fact, wished to remain anonymous but, after some coaxing, he agreed to speak with FOX 11, because he’s hoping more people will do the same and help stop school lunch shaming.

“I'm not looking for any glory in this. I just want to help people."

Carpenter has already donated to the Wild Rose and Wautoma School Districts.

He plans to finish giving to the other schools by the end of this week.